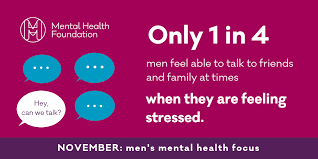 The royal family have hit the headlines this week regarding their mental health and their continuing advocacy for openness is a model for masculinity to follow. Harry and Meghan have spoken fairly candidly about the challenges they have faced in recent months concerning media intrusions and protecting their family. Harry has also alluded to the continuing impact of his mother’s death upon his perceptions of media interaction. I am not a royalist, and I do see the PR element of this week’s headlines, but I also see the positive aspect of mental health being discussed in major media outlets. The monarchy can play a significant role in continuing to break down these barriers and I hope Harry’s role can extend to models of masculinity for others to follow.

It is our combined influences that create our embodied masculine whole and when something is missing, we must reach out for support elsewhere. When I consider my own models for masculinity, I immediately think of my dad, but my masculinity was also heavily influenced by the women in my life. My mum played a huge part in nurturing the patience and sensitive side of my personality and this was reinforce during my teen years. For Harry, to miss out on that influence from his own mum must have been excruciating at times, like a part of him was and still is missing, but hopefully he has found someone in Meghan. Even with my solid foundations for my constructed masculinity, I have often found myself grappling with internal self doubt, confused perceptions of who I should be, and a fear of making the wrong choices. I am lucky to have an amazing partner in my life, and parents and extended family to share my feelings with when I need help, but this may not be the case for many men.

When I consider models for masculinity, I always find myself returning to the problem of inconsistency for many young children, especially from broken or unstable homes. I feel sad for children whose ideas of masculinity are associated with stoicism, bottled emotion and aggression. I wonder where children can access different models to counter these often damaging primary encounters. With gender imbalances in primary education, children’s access to masculine role models can be limited to the extent of their extra curricular activities; sport can be highly influential, as can martial arts, and the arts. I feel a sense of responsibility for my own child’s construction of masculinity, but also increasingly feel called to extend my influence to the wider community.

I commit to being open and trusting with my emotions amongst friends and colleagues. I also commit to contributing to the community and embodying a version of masculinity to vary from some of the dominant tropes I have mentioned. I sense the importance of ascribing a subversive intent in my actions, accepting the dominant paradigm will push back, to promote an awareness of the breadth of masculinities amongst my colleagues, family and friends.